What is Hyperemesis Gravidarum?

While hyperemesis gravidarum is much rarer than the usual morning sickness most women experience, it is the most common reason for admission into the hospital in the first trimester of pregnancy.

Hyperemesis gravidarum is treated with:

Thankfully, symptoms usually improve by the second trimester, but can persist throughout the entire pregnancy for some women. Ptyalism, or excessive saliva production, can be another problem associated with pregnancy.

Despite morning sickness being a very common problem, the causes are still unknown. Various theories suggest an evolutionary adaptation to protect women from ingesting toxins while pregnant or a severe reaction to hormonal changes in early pregnancy. Older theories invoking a psychological cause such as depression or ambivalence about the pregnancy have been completely debunked. 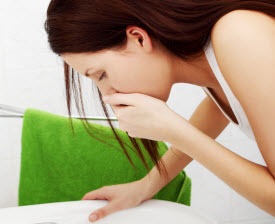 The severity of the symptoms, however, can cause significant stress for a newly pregnant woman, especially if hospitalization is required. Feeling miserable about what is supposed to be a “joyful” condition can induce guilt. Vomiting at work may cause some women to disclose pregnancy earlier than they planned to. And need for more help at home for the expectant mother or mother-to-be is an important issue for families to address.

Many women have not yet even started prenatal care visits when symptoms begin and do not seek help for this condition until vomiting becomes severe. Some believe it to be a “normal” aspect of pregnancy and others worry about the effects of medication use during the pregnancy.

This delay in treatment for severe nausea and vomiting can be harmful! Treatment of mild symptoms can often prevent the condition from getting worse. In addition, there are many other causes of vomiting that might need to be ruled out by your obstetrician or midwife. Daily symptoms that don’t resolve within a few hours of waking should prompt a speedy call to your OB-GYN's office.

What Can Women Take to Help With Morning Sickness?

Myths regarding morning sickness and eager purveyors of unproven remedies can exploit the pregnant woman’s anxiety about her condition. Non-medical treatments do exist, including:

We wish all expectant mothers a healthy pregnancy. Once a new baby is welcomed into the world, the nausea and vomiting become a distant memory.